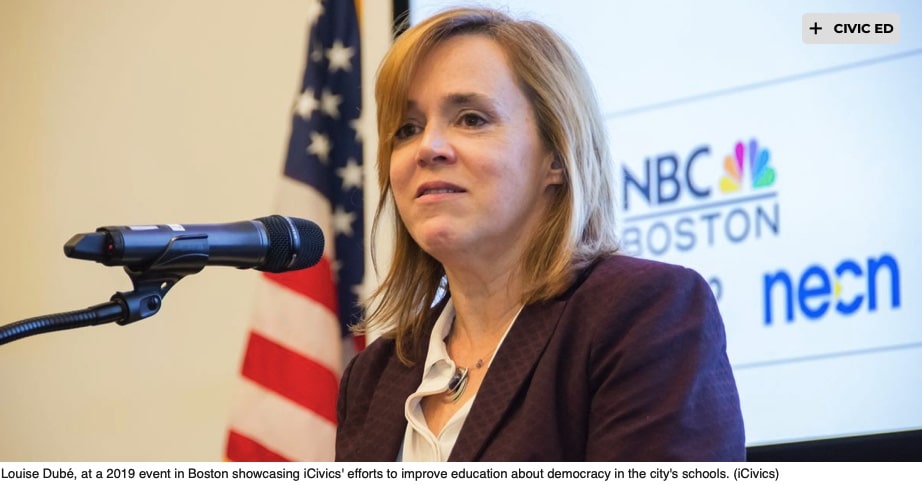 Louise Dubé is about to mark her sixth anniversary at the helm of iCivics, which offers a menu of online games and lesson plans that have become perhaps the most widely adopted civics curriculum in the country. (The nonprofit was started by Sandra Day O’Connor soon after she retired from the Supreme Court.) Dubé started her career as an attorney in Montreal but has been an educational innovator in the United States since the 1990s — founding an alternative school for youthful offenders in New York, launching three educational software startups and helping start PBS LearningMedia while directing the digital education efforts of the network’s station in Boston. Her answers have been edited for clarity and length.

What’s the tweet-length description of your organization?

I’m from Quebec, and I grew up during the independence movement. It was a scary time, and you had to take sides. The father of one of my classmates was kidnapped during the conflict. I campaigned actively for the federal system, which won in a referendum. I marched and knocked on doors. I was proud of having helped in a small way to keep Canada together.

What was your biggest professional triumph?

I’m proud of the growth and impact of iCivics. We have more than tripled in size since I joined, and expanded to all 50 states. Students learn actively and deeply with our games and other curriculum materials. I am most proud of the community of educators we have built who are enthusiastic about iCivics. No learning happens in schools without the buy-in and skill of teachers.

And your most disappointing setback?

Over the past three years, we have sought to stimulate a movement to prioritize and improve civic education to combat what ails our constitutional democracy. We have made a lot of progress, but so far, the field has not found a home — in other words, no set of supporters for whom this is the primary mission. While every report and every person concerned with democracy reform mentions and highlights the need for civic education, it has not gotten the investment it deserves.

Many funders see elementary and secondary education as resistant to change. Others see it as a long-term project that is the responsibility of the government. Yet, the government has dis-invested in civics over decades, with clear results. I am still hopeful this critical mission will find the supporters and resources it needs to be the solution it can be.

How does your identity influence the way you go about your work?

iCivics is deeply committed to nonpartisanship. To do this work, I needed to adopt that same stance in my personal life. I do not post or share about political issues. I do not rail against politicians or support issues viewed as belonging to one party or the other.

But while iCivics will never take partisan stances, we will uphold moral imperatives, such as racial justice.

As a result our CivXNow coalition of educators has aligned behind policies that address equity in civics and democratic schooling environments — plus support for educators to have difficult conversations in the classroom as well as deeper knowledge and media literacy. We’re working to do this while ensuring respect for a range of schools across very different viewpoints and local contexts.

Recently, though, iCivics made a commitment to pointing out institutional systemic racism in teaching about our institutions. This will alienate some, but it is the moral imperative of today.

What’s the best advice you’ve ever been given?

I hate advice, but here is something that has inspired me over the years: Start with the end. It helps bring much-needed clarity.

Also: Look deep inside to see where you need to go, and join with others to find purpose.

I sent this challenge to the iCivics team, which greatly appreciated the mission. The winner was a minty tie — between “Mint CitizenCHIP” (suggested by colleague Molly Launceford) and “27 A’mint’mints” (with 27 kinds of mint).

The runners up are “Liberty and Justice for Allmonds” (every other nut is out of luck, says suggester and head punster Emma Humphries) and “Seven Cream 76” (suggested by David Buchanan).

“Twelve Angry Men,” the 1954 play written originally for television by Reginald Rose. It’s not actually political, but it’s about the power of one person to strive for justice. I was trained as a lawyer after all. And HBO’s “Veep,” because … it’s fact based?

What’s the last thing you do on your phone at night?

Check email to see if a million-dollar donation came through. This rarely happens, though.

What is your deepest, darkest secret?

Starting when I was 12 years old, I tried to figure out how to move to “The States,” as they call it in Quebec. A number of harebrained schemes to get here all failed due to lack of cash. It is very gratifying today to have a very small role in improving our constitutional democracy as an American citizen.