Just as national polls show the American public’s deep dissatisfaction with Congress, Virginia voters are similarly fed up with the inability of their state legislature to avoid gridlock and pass common sense legislation.  A September 2018 statewide survey conducted by the Unite America Institute of over 400 likely voters found that 61% of Virginians don’t believe that Republicans and Democrats are working well together in Richmond.

Virginia has received F’s from the Center for American Progress for the openness and accessibility of its elections. In the Center’s interactive assessment of the strength of the democratic process in each of the 50 states and the District of Columbia, Virginia ranked 50 out of 51.  But this may be about to change. Several nonpartisan grassroots reform efforts are underway to fundamentally change the electoral system in the state by tackling redistricting reform, campaign finance reform and pushing for an alternative voting method.

The most promising reform involves an end to the system of gerrymandering districts to favor one party or another.  An amendment to the state constitution, which enjoys overwhelming bipartisan support (the 2018 Unite America Institute survey found that 65% of Virginians said they supported the cause), was approved by the General Assembly earlier this year.  This was an important initial win, but two more steps

are required. This amendment must, without any changes, pass the General Assembly again in 2020. It must then win the approval of Virginia’s voters in a statewide referendum on the November 2020 ballot.

The amendment includes many of the reforms proposed last fall by the Citizens Constitutional Amendment Drafting Committee (composed of bipartisan former legislators, policy professionals and election law experts) and convened by the nonpartisan redistricting reform group OneVirginia2021.  For the first time, Virginia’s political districts would be drawn by a redistricting commission, rather than by the legislators whose districts are at stake.

Virginia’s current voting districts were drawn in 2011 to protect the majority in each chamber, as the House of Delegates was then held by Republicans and the State Senate was held by Democrats. As OneVirginia2021 explains, this gerrymandered situation works against the will of the voter in several ways: it carves up communities (see the two examples below); removes competition; eliminates moderate influences; and creates partisan gridlock. 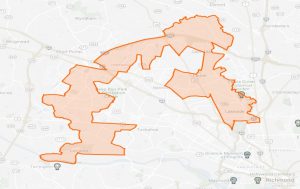 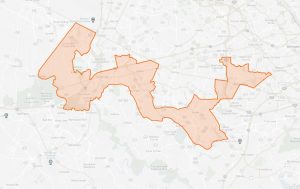 Gerrymandering in Virginia is nothing new.  In fact, it dates back to 1788 when Governor Patrick Henry attempted to influence the Congressional race between James Madison and James Monroe, the only instance of one future president running against another in the same Congressional district.  Today, the conflict of interest is clear when the legislature draws its own district lines. Gerrymandering is not a right versus left issue.  It is an issue of respecting citizens voting rights.

To learn more, you may want to view a documentary about gerrymandering with a focus on Virginia produced by WCVE/PBS in 2015 (“GerryRigged: Turning Democracy On Its Head”).  You can find the full film here. (56 min.)  You can find the shortened version here. (26 min.)

For more information on the 2019 amendment, visit OneVirginia2021’s website here.

Virginia’s grassroots democratic reform movement is not limited to eliminating gerrymandering.  Campaign finance reform and addressing hyper-partisanship through alternative voting methods such as ranked choice voting are also gaining support.  Fully 28% of Virginia voters self-identify as Independents (compared to 32% each for Republicans and Democrats).  When queried as to why they are independent, the survey cited above found that the vast majority of independents say that “both parties care more about serving their special interests than the people” –– with 51% strongly agreeing and another 21% agreeing with the statement.

FairVote Virginia is promoting a new voting method designed to give Virginians the chance to fight the increasing political polarization through a fairer process for determining who represents them.  Its called Ranked Choice Voting (RCV) and it allows voters to rank their candidates in order of preference.  If no candidate receives a majority on the first count, the candidate with the least amount of first place votes is eliminated until one candidate obtains a majority. RCV allows ballots to be

counted in a way that whoever wins does so with majority support.  It doesn’t ‘waste’ a voter’s preference for an independent candidate and it encourages candidates who seek compromise rather than appealing to the parties’ more extreme positions in primaries.

The Unite America Institute survey found that 42% of Virginians support a measure to introduce RCV and 20% remain undecided.  FairVote Virginia is the local chapter of the national FairVote movement, a non-partisan, non-profit organization composed of  Republicans, Democrats, Libertarians, Greens, and independents from across the Commonwealth.

In the current session of the state legislature, Delegates Nick Freitas (R – Culpeper) and Patrick Hope (D – Arlington) have sponsored HB2097 to bring ranked choice voting to Virginia. The bill would grant Virginia cities and counties the option to use RCV in their local elections. In 2018, Utah passed a similar bill  and Maine became the first state to use RCV in statewide elections.

To learn more about Fair Vote Virginia’s work on RCV and how you can support it, you can go to  fairvoteva.org/join.

Virginians also overwhelmingly support changing campaign finance laws. According to the Unite America Institute poll, approximately 75% of Virginians (66% of Republicans and 82% of Democrats) support limited matching public funding if candidates refuse to accept corporate and PAC contributions.  Virginia is one of only five states that set no limits on what companies can give legislators’ or legislative candidates’ campaign funds.  Most other states set limits on how much a donor can give and, in some states, who can give.

Because Virginia’s ethics laws rely on disclosure, the nonprofit Virginia Public Access Project (VPAP) believes it is imperative that citizens have easy access to public documents related to money in politics.  This organization posts fundraising information and other pertinent details about those seeking elec

ted office.  VPAP is fiercely nonpartisan and its singular focus is to give Virginians the information they need to make informed decisions.  VPAP, which grew out of a joint effort by the state’s five largest newspapers to track campaign contributions, has won awards from numerous organizations for its excellence and nonpartisan approach. 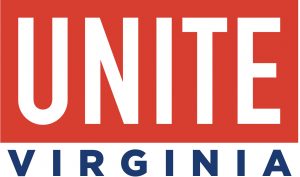 Virginia needs campaign finance reform.  RepresentUS, a cross-partisan grassroots democratic reform organization, is in the process of organizing local chapters in Virginia.  Read more about their support for the American Anti-Corruption Act, which sets a standard for state, local and federal laws, in my blogpost on “Citizen Reformers – Most Americans believe politics are rigged to favor big money and special interests. Fed up and demanding change, grassroots initiatives by citizen reformers are beginning to make an impact.”

Consider supporting the nonpartisan reform organizations mentioned in this post and sharing information on other grassroots initiatives focused on strengthening democracy in Virginia.