Against Huge Odds They Mobilized Support for An Amendment to the State Constitution – and Won!

The North Dakota oil boom has produced a billion-dollar budget surplus, or as North Dakotans for Public Integrity co-chairs Dina Butcher (a Republican) and Ellen Chaffee (a Democrat) pointed out: “it brought what many have described as the best state government money can buy.”  The oil boom, which has been hard on the land and the water, has also led to North Dakota getting a D- minus in a government integrity report three years ago.  That’s when Dina and Ellen said enough, and agreed that “fixing corruption fixes everything.” 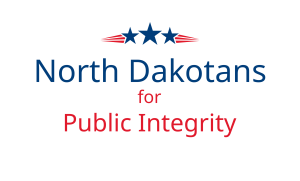 The debate over whether the state needed an ethics commission had been ongoing for years, and four times initiatives had been defeated by the legislature. With 19 multinational and state corporations, trade associations, the ACLU, and the Catholic Conference opposed to an anti-corruption initiative, the deck was definitely stacked against them.

Dina’s grandson gave the ladies their moniker ‘badass’ after commenting on one of their early brochures – and it stuck.  What began as early-morning, small group discussions over cookies and coffee, mushroomed into more than 36,000 signatures supporting the creation of an ethics commission.  Speaking at the recent Unrigged Summit in Nashville, Dina credits the fact that the North Dakotans for Public Integrity (which includes independents and libertarians as well as both Democrats and Republicans)  didn’t bring politics into their advocacy efforts.  They tapped into the ‘righteous indignation’ of ordinary citizens about corruption – something that had happened to them directly or after having read stories about the lack of transparency in state government and how laws had been passed in the previous session.

As the ladies traveled across the state, the people they talked with found them to be authentic.  “At our age, we have nothing to gain – we have no political agenda,” Dina explained.   “Both Ellen and I are losers in political campaigns on either side of the aisle, but ultimately, I think the authenticity and our honesty and wanting to make North Dakota a better place for our grandkids did the trick.”

Another big factor for their success was the support and encouragement Ellen, Dina and their organization received at the 2018 Unrigged Summit, where they realized there was a growing pro-Democracy movement in the country.  In accepting this year’s Unrigged ‘Courage’ award, Ellen said that attending last year’s summit “just opened a whole new vista I think for all of us and that kept us going. So many of you here and certainly many, many of our wonderful friends at home wrapped themselves around us and said ‘you’re okay, we’re gonna get this done.’  We made a lot of mistakes but people here and there made it safe and inspired us to continue.”

Last November, voters in North Dakota passed a constitutional amendment to overhaul government ethics oversight, one of the nation’s toughest ethics and transparency laws.  The initiative has provisions to ban foreign money from elections, restrict lobbying and create an independent ethics commission.

If these Badass Grandmas can beat the odds of going up against Big Money in politics, so can other ordinary citizens like you and I.  Consider joining one of the grassroots democratic reform organizations that are pressing for bipartisan solutions to our rigged political system.  Read more here.